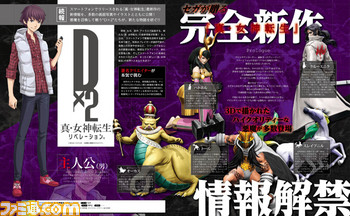 This weeks issue of Weekly Famitsu has listed out some features of the upcoming game Shin Megami Tensei Liberation.

The scenario is being done by Makoto Fukami. Character design is being handled by Tatsuro Iwamoto.

The protagonist, whose gender can be chosen by the player, has the ability to summon demons through their smartphone using the “Devil Downloader” (Dx2) application.

Players will become members of the “Liberators,” a secret organization that protects the world, and get caught up in a conflict between Dx2 users.

The Liberators’ hideout is a shared house in Akihabara. It is complete with facilities for demon fusion and strengthening, an item shop, and so on.

There are “Aura Gates” in which players will explore 3D dungeons, and challenge how far in they can go.

Demons are represented in high-quality 3D graphics. The series’ traditional demon negotiation and skill inheriting will return, and growth elements original to this game are being added.

Standing poses of characters in dialogue scenes are animated and fully voiced.

More details will be announced at Tokyo Game Show 2017.